Cookies help us deliver our services. By using our services, you agree to our use of cookies. More information

The Unofficial SmartThings Blog
Jump to navigation Jump to search

IFTTT is a free service that allows you to connect an event from one service/device with an action in another.

A typical example is if you get tagged in a Facebook photo, your Hue bulb blinks blue.

You can also use it to create indirect integration between two home automation systems that have no direct communication. For example, Lutron Caseta window coverings have an IFTTT channel, and so does SmartThings. This means that you can have a switch going on in SmartThings trigger your Lutron Serena shades to open, even though the two systems cannot talk directly to each other. However, there may be some lag while the message is transmitted through IFTTT, even up to 15 minutes. This is usually OK for things which run on a schedule, and some people find that the lag is much less at their house, about 30 seconds or so. So it can be a very helpful method of indirect integration. However, the lag may be too much for something like turning on a light when a person flips a switch as they enter a room.

The following IFTTT tutorial includes the Do Button widget feature which was introduced in 2015.

If This, then that. Works great, but it could take a few minutes to pass the messages around. And you don't get full integration with all the features of either system, just the ones they've chosen to make available through IFTTT.

So IFTTT just extends the features that you have.

The SmartThings channel will include a list of devices for both the "if" and "that".

If you want the outcome to be changing a mode or running a routine, then you can use a virtual switch to represent it and when IFTTT turns on the virtual switch, you can have SmartThings then change the mode.

There are several free SmartApps in the Lights and Switch subsection of the Marketplace section of the official SmartThings mobile app that provide wizards to set up the association between a virtual switch and a mode or a routine. 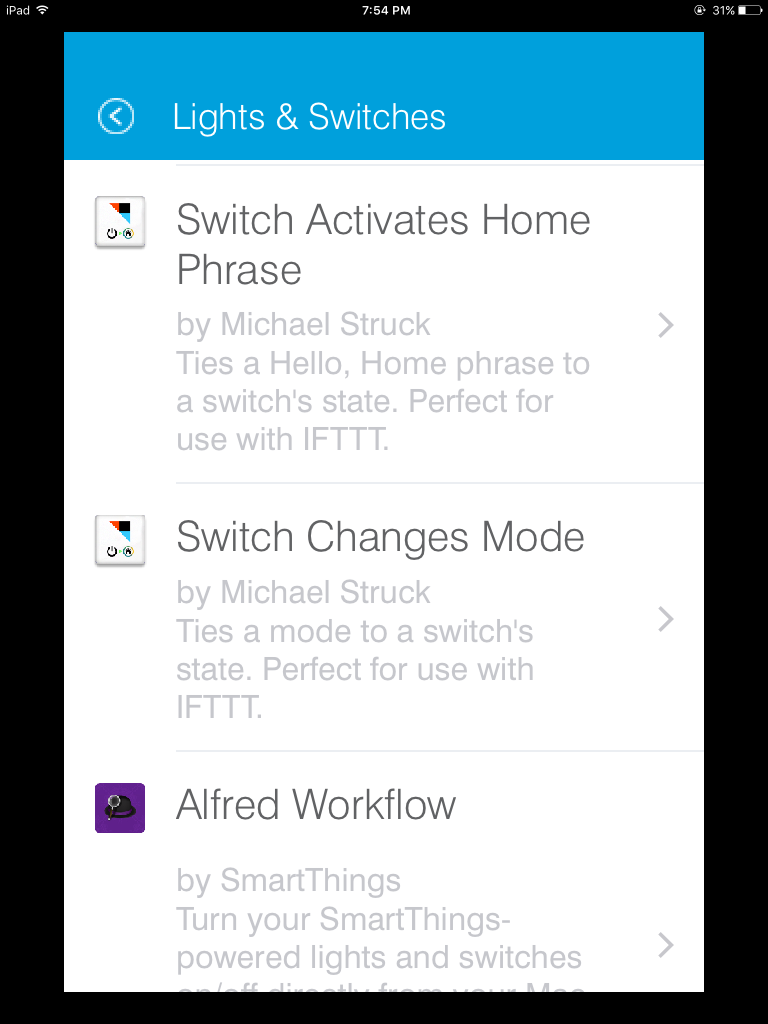 At the present time, IFTTT is not working in the UK, hopefully it will be added soon.